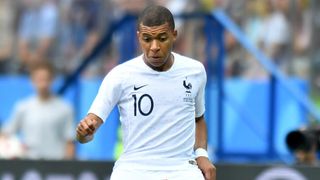 Thomas Vermaelen picked out Kylian Mbappe as the major threat to Belgium's chances of making their first appearance at a World Cup final, saying the 19-year-old forward can "decide every match in a flash".

Mbappe has scored three goals in France's unbeaten run to the semi-finals, grabbing headlines with his brace and match-winning performance against Argentina in the round of 16.

Vermaelen admitted his Belgium team-mates will have a number of the world's best players to contend with when they face Les Bleus in St Petersburg on Tuesday, but feels Mbappe is their stand-out talent.

"For me Kylian Mbappe is the best player in the French selection," Vermaelen told reporters. "He is extremely fast and can decide every match in a flash.

"But also players like [Ousmane] Dembele, [Olivier] Giroud or [N'Golo] Kante have their specific, strong qualities.

"It's just a very strong team, but for me Mbappe is the best."

Vermaelen has started just one of Belgium's five World Cup matches so far after only recovering from a hamstring injury just in time to travel to Russia with Roberto Martinez's squad.

The Barcelona defender came on as a second-half substitute in Belgium's 2-1 quarter-final victory over Brazil - a match he believes has given the team more belief that lifting the trophy is possible.

"Now we want to continue until the end," he said. "If we do not make it to the final, or do not become world champions, that would also be a disappointment.

"A few hours after [the Brazil game] the focus was already on the game against France. Because our ambition is winning that final.

"France has always been one of the favourites to win the tournament," he added.

"Maybe it will be a more difficult match than against Brazil."