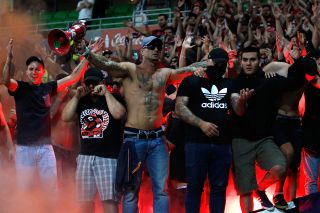 The Football Federation of Australia (FFA) have threatened the two sides with the loss of competition points after charging them both for bringing the game into disrepute because of supporter misbehaviour.

Incidents marred the recent match between the two sides on December 28 with both sets of fans brawling pre-match outside The Royal Melbourne Hotel before several flares and detonators were set off by Wanderers fans during the 1-1 draw at AAMI Park.

Both clubs have until January 7 to respond to the alleged breaches with the proposed sanction of three competition points suspended until the end of the season, subject to fan conduct.

FFA chief David Gallop noted that the sanctions are an unprecedented step for a domestic league in Australia, but were needed to curb anti-social behaviour.

"The loss of points that have been won fairly on the pitch is a harsh penalty, but it's in equal measure to the enormous damage caused by the type of anti-social behaviour seen in Melbourne last Saturday," Gallop said.

"The troublemakers are hurting the club they claim to support and they need to understand that the consequences of their reckless conduct will be felt on the A-League competition table if trouble persists.

"I have great sympathy for the overwhelming majority of fans who, like me, are sickened by the misconduct of a few, but it's time to make the consequences clear to everyone.

"We want a safe, enjoyable and family-friendly environment in the A-League and that's why we are taking this action.

"We are absolutely determined to rid the game of the type of behaviour was saw in Melbourne last Saturday."