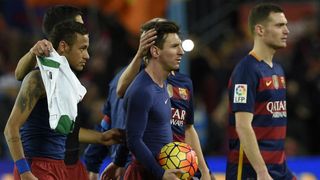 Barcelona full-back Aleix Vidal believes Lionel Messi collecting a fifth Ballon d'Or should be a formality after watching the forward complete a hat-trick in Saturday's 4-0 Liga win over Granada.

Vidal made his long-awaited full debut for Barca, having been signed during the club's FIFA ban from registering players, and turned in an accomplished display as Messi took centre stage at Camp Nou.

The Argentina superstar will head to Zurich for Monday's gala in the running for the main prize alongside team-mate Neymar and Real Madrid's current holder Cristiano Ronaldo.

Vidal told reporters pitchside after the match that it would be "strange" if the award did not make its way back to Catalonia from Switzerland.

"We all know who deserves it and if nothing strange happens one of the two of here will win," he said.

Victory took Barcelona back to the top of the table, a point above Atletico Madrid ahead of their nearest rivals taking on Celta Vigo on Sunday.

"We have put in a serious performance, we are leaders again and now we have to see what happens the rest of the weekend," Vidal said.

"We knew Granada have not been doing well but had good things up front. Justice has been done on the scoreboard."

Arda Turan, making his Liga debut for Barcelona in similar circumstance to Vidal, had a hand in Messi's first and third goals.

"Arda and I have tried to adapt during these months," Vidal added, "Today we have picked up three important points."