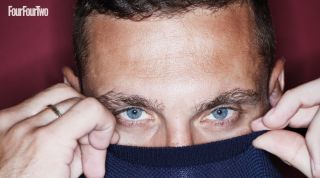 Vidic, who hung up his boots in January following an injury-hit spell at Inter Milan, was sent off six times during his United career, four of them coming in north-west derbies against Liverpool.

And the 34-year-old has revealed that he was once keen on linking up with the Anfield outfit, after then-Liverpool boss Rafael Benitez had shown an interest in bringing him to Merseyside.

Speaking exclusively in the September 2016 issue of FourFourTwo magazine, Vidic says: “Yes. Rafa Benitez called me and I nearly went there. I was interested in going but my English wasn’t good and I was struggling to communicate.

“Then Manchester United came. Fergie called me at my apartment and said: ‘I watched you play for Serbia against France - I want you here’. United were decisive. Everything was done very quickly, within two days.”

The former Red Star Belgrade stopper is now eyeing a move into management having retired from playing, but has no plans to dive straight into a head coach’s role, instead preferring to pick up pointers alongside a more experienced man.

“I would like to be a manager,” he says. “but only if I had the opportunity first to be a coach and learn from someone for maybe one or two years. I would take the experiences I had of the managers I’ve worked under. Nemanja the manager won’t be the same Nemanja that you saw on the pitch. They are two completely different roles.”

Read the full One-on-One interview with Nemanja Vidic in the September 2016 issue of FourFourTwo. Accompanied by our 100-page Season Preview - rating 128 teams - the magazine features the 81 things we want from the new season, including interviews with Demarai Gray, Javi Martinez, Neymar, Roberto Firmino, Brendan Galloway, Kelechi Iheancaho, Glenn Murray, Alex Iwobi, David Wagner, Sheyi Ojo and Michail Antonio. Plus, we meet footballers' yes men - the player liaison officers who cater to the stars’ whims - and the Wiki geeks - the men who make it possible for fans to use Wikipedia for their football info - as well as asking do team talks matter? The answer might surprise you. Go get it, then subscribe!