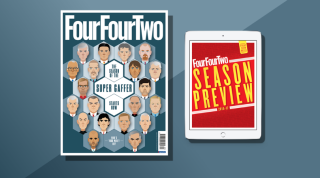 Is it really that time again? It feels like only yesterday that Wes Morgan and King Claudio were lifting the Premier League trophy and Jamie Vardy was havin’ a party. Leicester City, Premier League champions? You obviously read it in the FourFourTwo Season Preview 2015/16 first – our predictions were all spot on…

We’re gluttons for punishment (aka being called out on Twitter by you lovely lot), so we’re back with our previews, predictions and 81 – yes, EIGHTY-ONE – things we’d like to see during the 2016/17 season.

There’s even a dedicated page with space for you to take us on with your own predictions. As always, we want to hear from you. Have we missed a dead cert for relegation or overestimated what certain teams will achieve with their new managers at the helm? (We’re looking at you, Manchester).

Oh, and you may notice that we’ve had a bit of a facelift. All hail the FFT re-design. New season, new look.

Another thing we could have added to our list of things we’d like to see in 2016/17 – the re-emergence of top-class centre-backs. Instead, we chose to catch up with a Premier League legend renowned for his no-nonsense defending and tough tackling – former Manchester United captain, Nemanja Vidic. He answers your questions about joining the army, whether he nearly signed for Liverpool and that chant.

Encased in tradition, steeped in folklore and blanketed by secrecy so watertight that footballers take a vow of silence that’s still active decades later… half-time team talks. But how much difference do they really make? We asked the question…

Mud, sweat and beers the night before – the themes of Sunday League football are near universal. Photographer Chris Baker talks us through how he captured them for his new book, Sunday Football.

The popular perception of professional footballers as pampered prima donna is over-simplistic and wrong… except when it isn’t. We delve inside the secret lives of football’s ‘Yes Men’ – the player liaisons who must cater to their every whim.

Your club has been linked with a player (or seven) but you’ve never heard of the bloke. Well, there’s only one thing for it… fire up the Wiki. But who the heck is updating that goal tally? And more importantly, why?! We meet the men making the football pages of Wikipedia bang up to date.

Action Replay takes us back to the late ‘60s and the blossoming of footballers opening their own shops. From boutiques to sports stores, it all began with Bestie in a Deansgate backstreet...

In Performance, Manchester United playmaker Juan Mata reveals how to give big defenders the slip, we stalk your favourite players on Instagram so you can use their training tips, and Tea vs Coffee: what’s the best pre-match caffeine?

Available from August 3 in print, on iPad and iPhone or Subscribe!