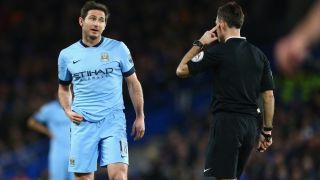 Villa was on the scoresheet as City claimed a 2-0 friendly win over St Mirren in their first ever competitive game on Tuesday.

Manchester City's Academy Stadium hosted the clash, but Lampard – the MLS team's other marquee signing – was in Stoke preparing for a Premier League clash.

Villa said it was best for the City Football Group to have the former England international helping Manuel Pellegrini's men challenge for the title.

"It would have been great if he was here now, but obviously for the football club the best thing is for him to stay in Manchester," the Spaniard said.

"We are only going to be focused to work hard so that when he joins in July, we can be a team that is really good and he can only improve us."

But he is eager to see a broader focus on his team, not just their two star signings.

"I think at the end of it all when everybody is calmed down and settled down a little bit that everybody can forgive and forget," Kreis said.

"It's my dream really that at some point very quickly the fans of NYC aren't talking about the individual players, I'm hopeful they understand that this is about a team, it isn't about David Villa or Frank Lampard or Jason Kreis.

"This is about a squad and a club and what we can do for the community."