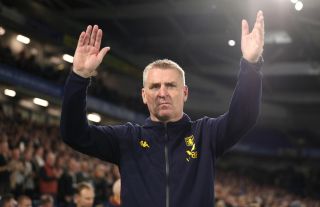 Aston Villa boss Dean Smith joked that tying Raheem Sterling’s shoe laces might be the only way to stop the free-scoring England star on Saturday.

Villa visit champions Manchester City in the lunchtime kick-off buoyed by victories over Norwich and Brighton, their first back-to-back wins in the Premier League since May 2015.

But Villa will be facing a red-hot Sterling, who has scored 16 goals for club and country this season after his 11-minute Champions League hat-trick against Atalanta on Wednesday.

City manager Pep Guardiola labelled Sterling “an extraordinary player” after that game, and former England defender-turned-pundit Rio Ferdinand said the 24-year-old is “in the top five players in the world now”.

“I would echo sentiments that he’s an extraordinary player, he’s proving that with club and country at the moment,” Smith said of Sterling at his pre-match press conference.

“We are looking at trying to tie his laces together!

“He’s one that has to be stopped because he’s been incredible over the last six to 12 months.

“But what a challenge for our players to stop him, to make him have a lesser performance than he has had recently.”

On Sterling’s development under Guardiola, Smith said: “I look at his attitude, application, coaching as well.

“He looks an all together all-round player now. Not individualistic, he’s a team player.

“It’s frightening that he’s only 24. He’s up there as one of the best players in Europe.”

Villa head to the Etihad Stadium encouraged by the fact they are unbeaten in four games in all competitions, three of which they have won.

City are averaging over three goals per game this season but have lost twice, to Norwich and Wolves, and trail leaders Liverpool by six points.

“You watch them against Atalanta, they scored five good goals and it does fill you with a little bit of trepidation,” Smith said.

“They are a top team with an unbelievable winning record in the Premier League over the last two or three seasons, but they’ve shown they’re not infallible.

“You can go and approach it and say ‘oh no, we’re going to Man City’ or see it as a great opportunity to show what we’re about. Hopefully our players will take the latter.

“We’re not taking on a super-human team, although they look like it at times. It’s a team that can make mistakes, and when they make mistakes you’ve got to punish them.”

Villa are still without Jota as the Spanish forward underwent surgery two weeks ago and has yet to rejoin training.

But Jonathan Kodjia (fractured cheekbone), James Chester (hamstring) and Kourtney Hause (mumps) are available after playing for the Under-23s in midweek.