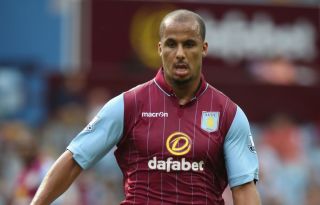 Aston Villa forward Gabriel Agbonlahor will be unavailable for the next two weeks as he undergoes a personal fitness programme.

Agbonlahor missed last weekend's defeat to AFC Bournemouth, which all but relegated the Premier League's bottom club, due to a virus and he also sat out against Chelsea as an internal investigation was held into his conduct while on a break in Dubai.

Villa took no further action against Agbonlahor over photographs allegedly showing him to be smoking a shisha pipe but interim manager Eric Black will once again leave the team's longest serving player on the sidelines after deciding he needs to resolve fitness issues.

"Last week I didn't want Gabby to come in with a virus and be around the other players," Black said at a news conference.

"Gabby and I had a meeting on Monday. We've decided he'll work separately from the group and work on his own fitness programme. He'll follow that for the next 14 days. We felt together he needs to improve his fitness."

Agbonlahor is set to miss Saturday's trip to Manchester United, a match in which Villa could already be relegated if Norwich City take a point off relegation rivals Sunderland in the early kick-off.

The match against Southampton on April 23 also falls under the period of his fitness programme, but Agbonlahor could be up to speed for the final three matches of the season against Watford, Newcastle United and Arsenal.

The 29-year-old former England international has a solitary goal to his name in 15 Premier League appearances this season.