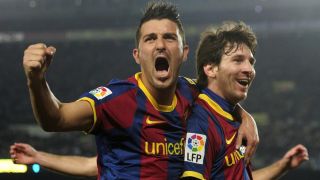 David Villa has revealed a decreasing amount of game time saw him make the decision to leave Barcelona for Atletico Madrid in 2013.

The Spaniard was purchased by Barcelona from Valencia in 2010 and spent three seasons at the club, winning a total of eight trophies.

However, a number of substitute appearances in 2012-13 under Pep Guardiola saw Villa decide to leave the Camp Nou.

The 34-year-old went on to win a La Liga title under Diego Simeone, before moving on to New York City in the MLS.

"I had a contract at Barcelona, and they wanted me to continue, but I felt like I had lost prominence and I wanted to get it back at another club. I went because of that," he told beIN Sport.

"I have always said playing with [Lionel] Messi was fantastic. I just decided to leave because I lost my spot.

"I always tried to be a realist about where I was, where I could reach, but I lost game time and I wasn't playing because of technical decisions.

"The easy way would have to stay at Barcelona and win titles but I wanted to be on the pitch. I looked for an exit.

"People said a lot of things about other things, but it was simple, I decided to leave because I didn't want more time on the bench than on the pitch."

The 34-year-old went on to win a La Liga title under Diego Simeone, before moving on to New York City in the MLS.

"It was a fantastic year, because it was not easy," he added.

"At Atleti everything turned out well on all levels, and it's one of the best memories I will have.

"Simeone has a way of playing and he knows how to win and the way to win. He has something important, that all players follow him."