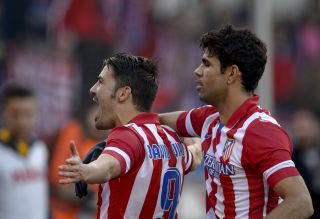 Brazil-born Costa featured in two friendlies for his nation of birth earlier in the year, but remained eligible to Vicente del Bosque as they were not competitive outings.

After declaring his commitment to Spain, he has been included in the squad for their upcoming clashes with Equatorial Guinea and South Africa.

As well as Costa and Villa, Atleti duo Juanfran and Koke were included in Del Bosque's squad for the friendlies, with the likes of Adrian Lopez and Mario Suarez having previously been capped.

The capital club have made an excellent start to the season, sitting one point off La Liga leaders Barcelona and qualifying from UEFA Champions League Group G with four wins from as many games.

Villa is delighted to see that form rewarded with international call-ups and is targeting more ahead of next year's FIFA World Cup in Brazil.

He said: "Let’s hope even more Atleti players get called – the more Atleticos at the World Cup, the better."

Villa was speaking at the fourth-round draw for the Copa del Rey, which saw the holders drawn against third-tier side Sant Andreu.

The striker called on his team-mates to dominate their lower-ranked opponents and set the tone for their defence.

"Atletico have to show why we won the competition last season and we need to do that right from day one," he added.

"Of course we need to be humble but believe that we can retain the trophy."