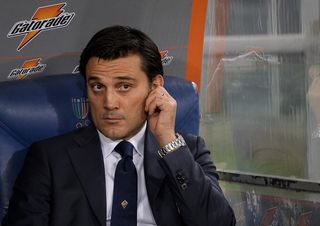 It was the Italian side's third straight win the UEFA Europa League and completes a week which started with a stunning 4-2 win over Juventus in the Serie A.

Montella was full of praise for 19-year-old midfielder Bakic, believing his slow start was set right by an excellent second half.

"Bakic had a rough start, as he was a bit tense, but he played very well in front of the defence," Montella told Sky Sport Italia.

"By the end of the match he was running the midfield and he is fortunate enough to be able to grow up here with us, though it'll take time for him to reach peak form."

The 39-year-old tactician also hailed the performance of winger Joaquin, who found the net against both Juventus and Pandurii.

"Joaquin put in a great performance - he has exceptional quality, but is finally finding the right level of consistency," Montella said.

"We took a while to understand each other, but now he has settled into the squad and understands all my directives.

"He just needed a few more weeks compared to the others to find his form."