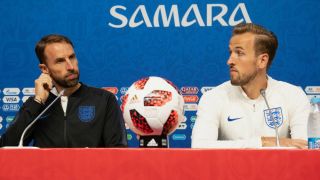 The unlikely combination of Atomic Kitten and Gareth Southgate is one being savoured by fans following England's Russia 2018 campaign at home and abroad.

Supporters of the Three Lions have dedicated a chant to their manager to the tune of 'Whole Again', a number one hit for the British girl group back in 2001.

England's progression to the World Cup quarter-finals, where they will face Sweden in Samara on Saturday, has prompted an outpouring of love towards Southgate on social media.

That has included praise for his trademark waistcoat and the '#GarethSouthgateWould' trend on Twitter, outlining all the altruistic acts England's manager would perform in keeping with his nice-guy persona.

In a media conference on Friday, it seemed Southgate did not quite know what to make of it all but experience has taught him not to get carried away on the wave of public acclaim.

So.... are hereArguably the best Atomic Kitten have ever sounded July 5, 2018

"They [Atomic Kitten] wouldn't be my first-choice band, but it's nice to be recognised by the supporters so that's been a nice thing to have," he said.

"It's not as questionable as some of the lyrics of songs about me in the past so long may that continue!

"I'm very balanced about that and I'm preparing the team as well as I can for an exciting challenge. We hope to continue to make the people at home proud."

Sitting alongside Southgate, England captain Harry Kane was asked for his thoughts on his manager.

"He's been fantastic since he came in. I knew him well from the Under-21s and we've always had a good relationship, it's been no different.

"The camp's been great, it's been easy going but we've worked hard at the same time. Obviously he's had experience in these tournaments and knows what it's like so that's been massive.

"The time around the hotel and with families has been really good, hopefully we have this relationship for a long time in the future and keep getting better and better."