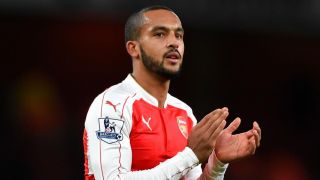 Arsenal attacker Theo Walcott believes the level of competition in the MLS is gaining ground on the English Premier League.

Walcott is in California ahead of Arsenal's friendly clash against an MLS All-Stars side on Thursday, which features the likes of Didier Drogba, Kaka, David Villa and Andrea Pirlo.

The 27-year-old said he was excited to be playing against the All-Stars, and believes the level of football in the United States is closing on the Premier League.

"There's a lot of players that have come from England to America. The game's growing, it's getting bigger and that's exactly what we want.

He added: "When I was a kid we always used to hear about the All-Stars, obviously with basketball, and to actually be involved in an All-Star match against America's best is great to be part of, to be honest.

"Hopefully there will be more and more of this, and hopefully we can show what the Premier League's about."

The MLS has had several stars move to the league since David Beckham joined Los Angeles Galaxy in 2007, with former England internationals Steven Gerrard and Frank Lampard both currently playing for Galaxy and New York City respectively.