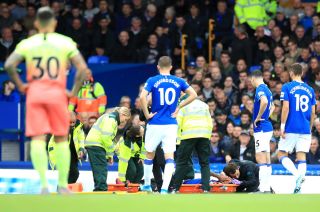 Everton winger Theo Walcott’s recovery from a head injury is “on track” and he could return to training this week.

The 30-year-old was discharged from hospital on Saturday following precautionary scans after he was hit by a Raheem Sterling cross early in the 3-1 defeat to Manchester City.

Everton are following standard concussion protocols and have not ruled out Walcott rejoining the squad ahead of this weekend’s trip to Burnley.

“Since his discharge, the club’s medical staff have continued to follow the standard concussion protocols with the forward,” said an Everton statement.

“Walcott is on track in his recovery ahead of a potential return to full training later this week.”