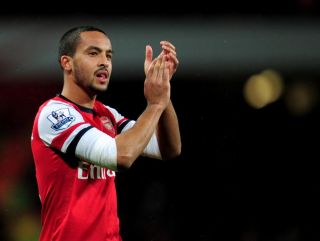 The 25-year-old ruptured the anterior cruciate ligament in his left knee towards the end of Arsenal's FA Cup third round victory over rivals Tottenham in January.

Walcott has now stated that he will only return when he is fully fit and will not try and rush back to be part of Roy Hodgson's England squad for the World Cup in Brazil later this year.

"I am not pushing myself to be fit for the World Cup or anything like that," he told Arsenal's matchday magazine for Monday's Premier League clash with Newcastle United.

"I want to be back quickly, of course, but safely too. I want to try and be back for the early part of next season, that is the goal, so there will be a lot of hard work throughout the summer and during the World Cup."

On his comeback, he added: "It has nearly been four months now and my recovery has gone on track so far.

"At the moment, I'm working on muscle strength and building muscle in my quad.

"I don't see any point in being down in the dumps about the injury because it has already happened and there are a lot of people with worse problems in the world.

"I will just get on with my work. I am first in and last out on most days. I see the consultant soon, too, and hopefully he will give me the thumbs up to push on. I would love to be running in a few weeks."