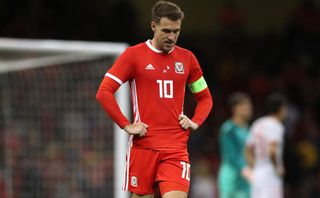 Ryan Giggs hopes Aaron Ramsey will recover in time for the Euro 2020 qualifier with Croatia on Sunday after being forced to leave the Juventus star at home for the crunch tie in Slovakia.

Ramsey’s unavailability has been a constant theme of Wales’ European Championship qualifying programme, with the 28-year-old yet to play a single minute of the Dragons’ campaign.

The former Arsenal midfielder did train on Wednesday morning after reporting a groin problem, but Giggs’ squad flew to Slovakia without him.

“He did a bit of training and the physio has stayed back to work with him,” Wales manager Giggs said ahead of Thursday’s Group E clash with Slovakia in Trnava.

“We are hopeful that he will be available for Sunday. He has a chance.”

Wales trail group leaders Croatia by four points and are three adrift of Slovakia and Hungary.

They have a game in hand on all of their rivals and Giggs knows they must be vastly improved away from home after summer defeats in Croatia and Hungary.

“We need to play better, but the circumstances were different in the summer,” Giggs said.

“Some players hadn’t played for five weeks. You can always lose in football, but it is how you come back that’s important.”

UEFA had originally ordered for the game to be played behind closed doors, with Slovakia fans found guilty of making “illicit chants” during last month’s victory in Hungary.

Slovakia won their appeal against the fans’ ban, saying the chants had been political rather than racist, and there will be a 20,000 sell-out crowd at Trnava’s Anton Malatinsky Stadium.

UEFA’s three-step protocol for racial abuse ends with the officials abandoning a match if announcements inside a stadium do not stop the problem, but Giggs says he has not spoken to his players about the issue.

“It is not something Wales have really experienced, I think a bit with the under-21s,” Giggs said.

“It is not something we have really talked about.

“We recognise racism is a problem, but I don’t like to preempt what might happen. Hopefully we just have a good game of football with no problems.”

Gareth Bale is back on international duty amid reports in Spain that he is unsettled there and wants to leave Real Madrid.

Asked if he is playing with anger at the moment, Bale said: “You play with a lot of emotion.

“Anger comes into it of course, but I haven’t got anything to clear my mind about.

“I try and give my best whether here or in Madrid and I will continue to do that.”

Bale’s first Wales goal came at home to Slovakia in 2006 and he was also on target against them during a 2-1 win in Bordeaux at Euro 2016.

“I have scored against them in the past, but it does not affect what will happen in the future,” Bale said.

“I suppose you could say so (whether it’s make or break). But no matter the situation, we want the three points and to go and win the game.

“We understand the situation in the group and know what we need to do.”