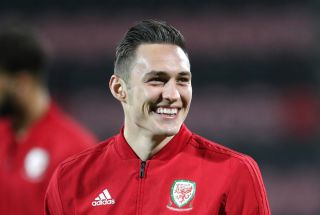 Connor Roberts has revealed how the Wales squad have sought inspiration for their European Championship campaign by watching footage of Euro 2016.

Wales went football crazy three summers ago as Chris Coleman’s side reached the semi-finals of Euro 2016 after ending a 58-year wait to play at a major tournament.

The journey in France began with a 2-1 win over Slovakia in Bordeaux – the same opponents that Ryan Giggs’ side face in their opening 2020 European Championship qualifier at the Cardiff City Stadium on Sunday.

“The other day we watched clips of Euro 2016 and it certainly had me twitching in my seat,” Swansea defender Roberts said.

“We saw goals from the qualifying campaign and, in the Euros, Ben Davies’ clearance off the line and Hal Robson-Kanu’s winner against Slovakia.

“I want to be part of that and it’s got to be the same for David Brooks, Harry Wilson and the other young lads.

“People have talked about it being Slovakia again and it’s almost a replay of that game.

“I think the boys want to prove that win wasn’t a fluke and we are good enough to get to another major competition.”

Roberts says he was “probably in the pub or the rugby club” as Wales blazed their way across France, fuelled by the goals of Gareth Bale and a ‘TogetherStronger’ motto that became the mantra of a united nation.

Since then Roberts has emerged for club and country, one of a dozen players who have made their international debuts during Giggs’ 14 months in charge.

“He (Giggs) is very trusting of young players and I think that comes from his own upbringing,” Roberts said.

“He got thrown in when he was a youngster at Manchester United and Wales and he’s done the same as a manager.

“A lot of the young lads have played games and we’ve got options now going into these qualifiers.

“I’m really excited to see what the young boys as well as the experienced lads can bring to the table.”

Slovakia started their European Championship programme with a 2-0 home victory over Hungary on Thursday night.

With top seeds Croatia also making a winning start, 2-1 against Azerbaijan on the same evening, Wales are already playing catch-up to their biggest rivals in the five-team group.

“Slovakia will probably be after revenge (for Bordeaux) and will want to show they are good enough to win big international games,” Roberts said.

“It’s a huge game and if we get off to a good start on Sunday, it will give the boys, the staff, the fans confidence that we can qualify for the Euros.

“Our job now is to create more memories and the end goal is to qualify for another major competition.”