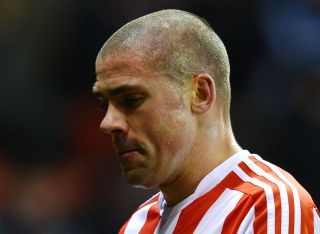 Stoke were handed the chance to earn an unlikely point at Liverpool on Saturday when Daniel Agger handled with two minutes remaining with the Anfield side 1-0 up.

But Simon Mignolet denied Walters from 12 yards and kept out a follow-up effort from Kenwyne Jones to leave new manager Mark Hughes to rue what could have been.

Walters also missed two penalties in one game at home to Chelsea in January and a spot-kick against Fulham in February, but would not hesitate in stepping up to take Stoke's next penalty should he be instructed to.

The Republic of Ireland international striker, though, concedes Hughes has yet to tell him either way whether he will retain the responsibility.

"Yes, it is hard when you miss, but I was big enough to take it," Walters told the Stoke Sentinel.

"After the game, I said sorry in the changing room to the lads and that's it.

"The manager hasn't said anything, but I wouldn't have a problem stepping up again.

"I'm sure there are other lads wanting to take penalties, but if the opportunity came up again I wouldn't shy away from it."