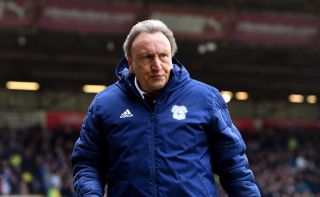 Neil Warnock fears his Cardiff side could be relegated from the Premier League by Wilfried Zaha – the man he once rescued from Manchester United misery.

Cardiff must win their final two games, at home to Crystal Palace on Saturday and at United next weekend, to have any hope of overtaking Brighton and avoiding the final relegation place.

Brighton have a four-point advantage and a far superior goal difference ahead of their final games against Arsenal and Manchester City.

“If we don’t win this game against Palace, we can forget it,” Cardiff boss Warnock said.

Here's how much the Premier League and EFL tables can change this weekend: pic.twitter.com/EwtPlSqtWk— Ben Mayhew (@experimental361) May 3, 2019

“But we are up against a side that play some of the best football in the Premier League away from home. We have to hope we can cope with that and our forwards can create chances.”

Zaha became Sir Alex Ferguson’s final signing as United manager in January 2013 when he left Palace in a £15million deal.

He actually moved to United the following summer, but never started a Premier League game under Ferguson’s successor David Moyes.

Zaha joined Cardiff on loan in January 2014 before returning to Palace the following August when Warnock was the manager at Selhurst Park.

“I know Cardiff were a bit disappointed with him when they had him here, but Manchester United had let him down badly,” Warnock said.

“Wilfried wasn’t in a good place when he came back. I met him in the chairman’s office and I had half an hour with him.

“It was obvious he felt let down by Manchester United and when I spoke to him I could understand why he felt that.

“He was only a young lad and he needed help – an arm around the shoulder. It didn’t appear he got any of that.

“But I thought it was important we re-signed him and he’s gone on to do really well. He’ll be the best player on the pitch on Saturday.

“Everyone knows that when Wilfried gets the ball, he’s dangerous – and he’ll probably go on to a top club in the new few years.”

Warnock was this week fined £20,000 by the Football Association for remarks he made in three separate interviews following the controversial 2-1 home defeat to Chelsea on March 31.

The 70-year-old has accepted the fine after calling Premier League officials the “worst in the world”, but says he is bemused by the FA’s disciplinary procedures.

“When you get an institute like the FA, as big as it is, I find it disappointing that they’re allowed to bring in an outside barrister to prove the case against me,” said Warnock, who was represented at the London disciplinary hearing by the League Managers’ Association.

“He had all the information on what my arguments are three to four weeks before and (time to) get his head around it. It’s a bit out of order if I’m honest.

“I was disappointed in the first two charges. I didn’t think they warranted being proven guilty, not when we showed them an article (highlighting) what (Chelsea manager, Maurizio) Sarri said about referees less than three weeks ago and he never got a charge.”

Chelsea defender Cesar Azpilicueta scored the equaliser at Cardiff despite being in a clearly offside decision and the Spaniard joked this week about paying Warnock’s fine.

“They got winning bonuses, which they all know being footballers they shouldn’t have got anything at all,” Warnock said.