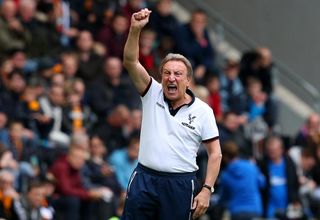 Saturday's defeat at the KC Stadium on Saturday was Palace's first under Warnock in the league since he returned for a second spell as manager in August.

Mohamed Diame's thumping header on the hour mark and a cool finish from Nikica Jelavic in the closing stages were enough to hand Hull a first Premier League win since the opening day.

However, Warnock was left seething with Dean for what he considered to be a series of soft bookings throughout the match, while stating that Dawson should have been dismissed as he felt he had elbowed Fraizer Campbell, a former Hull loanee, in the first half.

"I was disappointed, I had to take Fraizer Campbell off. [He was] one of a number of bookings that were silly," Warnock said.

"But in the first minute he [Campbell] gets body checked just outside the box, then just before half-time, the elbow from Dawson I've seen red cards given for less than that, but the referee doesn't see that. He just sees all the little niggles that poor old Fraizer gets booked for.

"I think they [referees] should be in a position to see elbows like that and know when it's not an accident, he shouldn't be allowed to lead like that, it's dangerous play.

"They should be educated a little bit better, even though he's one of our better refs."

Palace's hopes were dealt an early blow as Scott Dann had to be replaced by Adrian Mariappa with 12 minutes gone after appearing to hurt his knee blocking a shot from Tom Huddlestone.

Warnock confirmed the centre-back is due for a scan and is unsure how severe the injury is.

"We were unlucky Scott Dann got injured so early when he's done so well for us lately," he added.

"It threw a little spanner in the works. Fair play to the lad Mariappa who came in, they handled it well.

"He's a big loss, hopefully it's not too bad you don't know until you get the scans."