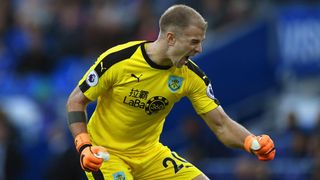 Cardiff City manager Neil Warnock has told Joe Hart to forget about returning to the England squad despite applauding the Burnley goalkeeper's performance on Sunday.

Warnock's side lost 2-1 at home to the Clarets, their fourth successive Premier League defeat in 2018-19.

The scoreline did not tell the full story, however, as Burnley spent much of the game under pressure and had to rely on Hart's heroics in goal.

The 31-year-old, who joined Burnley from Manchester City in pre-season, has been vocal about not giving up on his international career despite being left out of Gareth Southgate's World Cup squad, but Warnock thinks he should focus his energy on enjoying club football.

"I thought it epitomised the whole game that Joe Hart got man of the match. Even I was clapping the save from [Josh] Murphy. It was a fabulous save," Warnock told reporters.

"I think he should just let it go now, really, and concentrate on enjoying his game.

"Gareth doesn't play like Burnley do, it's a different ball game and I think Jordan Pickford is better at playing it out from the back and being a sweeper.

"I didn't see that very often today. I had to laugh when I heard Sean [Dyche] saying about our long-ball game – I don't think they kept it more than two seconds at the back."

The win was Burnley’s second in succession in the league and, after starting the season with a draw and four defeats, Dyche thinks his side are getting back on track.

"Now we've got another win on the board and the story changes, and we never make grandiose statements, but I think we are getting back to what I want us to be," Dyche said. "But there's still work that needs doing and plenty of room for improvement.

"We've had our challenges with two very good players injured, we worked hard in the [transfer] market and didn't get everything we wanted, so that placed an extra demand on the players we've got.

"Then you have to add in the games programme, including two flights abroad and ending with a flight to London with 16 players.

"That's not an easy task, but my job is to see through all that and still look at what we believe is right for the players.

"They deserve the most credit, for me, because it's hard when you are out there, but they have performed again today in order to get a win."