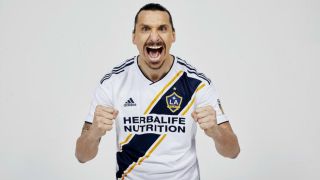 Zlatan Ibrahimovic was given a superstar's welcome as the Galaxy signing landed in Los Angeles on Thursday.

Ibrahimovic, 36, signed with the MLS outfit earlier in March after 20 months at Manchester United.

The veteran striker was greeted on arrival by a frenzied crowd as fans and the media gathered in anticipation.

Ibrahimovic could make his debut for the Galaxy in their blockbuster clash against Los Angeles FC on Saturday.

The Galaxy have made a mixed start to the season, with one win, one draw and a loss in their opening three games.

Ibrahimovic's signing is sure to provide a boost, the former Sweden international having enjoyed a decorated career across Europe.

He has won the Eredivisie, Serie A, LaLiga and Ligue 1 during his career, while he helped United to the Europa League and EFL Cup trophies last season.