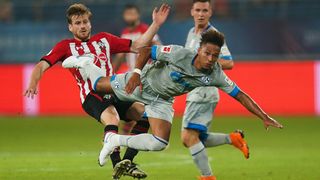 Southampton's opening pre-season friendly turned into a thriller as they drew 3-3 with Schalke in China and the last of the game's six goals was something a bit special.

Mark Hughes' side took on the Bundesliga runners-up in Kunshan as part of the Club Super Cup tournament and Nathan Redmond cancelled out Yevhen Konoplyanka's early strike to leave the score 1-1 at half-time.

Harrison Reed and Jake Hesketh scored either side of a Suat Serdar effort to make it 3-2 to the Saints with six minutes left, and then Schalke winger Steven Skrzybski unleashed a stunning shot from 25 yards into the top corner of the net to ensure the game ended all square.

New £7million signing from Celtic, Stuart Armstrong, made his non-competitive debut for Southampton and linked up well with Redmond in a lively attacking performance.