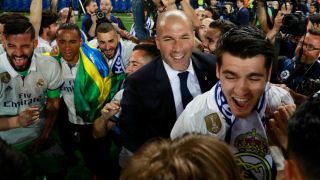 Real Madrid's LaLiga title winners were keen to ensure Zinedine Zidane was not left out of their celebrations, splashing him with champagne as he spoke to the media.

Zidane was conducting his post-match media conference with reporters after Madrid's 2-0 win at Malaga, given to them by Cristiano Ronaldo and Karim Benzema, wrapped up the title - only for five of his players to invade the event.

An initially startled Madrid head coach was splashed with champagne by Alvaro Morata, Marcelo, Lucas Vazquez, Casemiro and Danilo before he began jumping around with his players, who chanted, 'Campeones!'.

Morata briefly sat in Zidane's seat and Marcelo lingered for a hug with a drenched Zidane, who then slowly returned to his position to finish off his media duties.

Zidane was surprised by his celebrating players during the post-match press conference! May 21, 2017