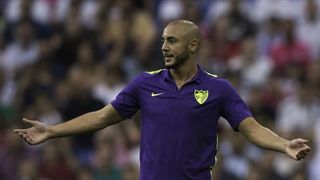 New Watford signing Nordin Amrabat could fulfil a longstanding personal ambition when the Hornets host Newcastle United in the Premier League on Saturday.

Amrabat arrived at Vicarage Road from Malaga on a three-and-a-half-year contract earlier this week and is in line to make his debut against Newcastle, as Watford look to end a run of four consecutive Premier League defeats.

The 28-year-old forward has expressed his "dream" of playing in the English top flight and cannot wait to be involved in Quique Sanchez Flores' matchday squad.

"I'm really excited; I hope Saturday comes fast and I can get some minutes," Amrabat told the club's official website.

"It was a dream to play in the Premier League and I had a chance one year ago but I joined Malaga.

"I've seen Watford play several times, I saw them beat Liverpool 3-0. They have a Spanish coach who tries to get them playing good football, and I'm looking forward to being part of the team.

"I want to help my team and do my best. Hopefully I can make the team stronger with my qualities, I'm going to give 100 per cent and hopefully make the fans happy.

"The Premier League is the best competition. Every game is exciting, there's a lot of action and it's always nice to watch the games."

Meanwhile, Newcastle playmaker Jonjo Shelvey has pledged to immerse himself into his new role in the middle of the Magpies' midfield, following his big-money switch from Swansea City.

Shelvey enjoyed an impressive debut against West Ham last weekend, playing a major role in goals for Ayoze Perez and Georginio Wijnaldum in Newcastle’s 2-1 victory, but he has previously been accused of shying away from the dirty work in midfield.

However, the former Liverpool man has stressed that he will commit to every aspect of his position as Steve McClaren's side look to climb out of the bottom three.

"I will never shirk a challenge. I just want to work my socks off for the team. Hopefully I can chip in with goals too. I like to get forward and score goals, we're looking for more belief going forward," he told the Newcastle Chronicle.

"My dad would kill me if I pulled out of a challenge. I look to put in all-action displays in midfield and chip in with goals and assists as well."

Newcastle's Paul Dummett (hamstring) is a doubt for the game, while Siem de Jong (eye), Vernon Anita (hamstring) and Papiss Cisse (groin) are definitely out.