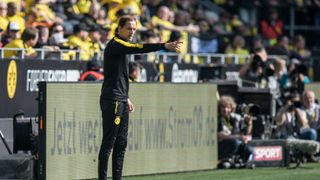 Thomas Tuchel insists Borussia Dortmund still have work to do in the race for automatic Champions League qualification despite a vital win over Hoffenheim on Saturday.

Marco Reus and Pierre-Emerick Aubameyang were on target as Dortmund leapfrogged Hoffenheim into third place - finishing in the top three would guarantee they avoid the qualification rounds.

However, despite a two-point advantage over Hoffenheim with just two games remaining, Tuchel is adamant that his side must continue to work hard in their remaining fixtures against Augsburg and Werder Bremen.

"We showed an outstanding defensive performance right from the start - that was key," he told a post-match news conference.

"Of course, we took the lead with an offside goal, but you all know that I am happy with every goal we score.

"I must emphasise again that we are not finished. We still have hard weeks ahead of us. It is of fundamental importance that we do not lose this energy.

"We want to win another three times this season [including the DFB-Pokal final against Eintracht Frankfurt]."

An interview with Dortmund CEO Hans-Joachim Watzke published on Saturday piled pressure on Tuchel, suggesting his future could be impacted by a fourth-placed finish but the coach says he was focused only on the match.

"Watzke's interview did not disturb us today, because we totally focused on this game," he added.

"We needed a clear focus on this game and it won't be easier now."