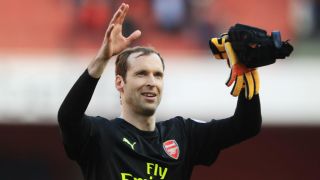 Petr Cech fears Arsenal may live to rue their defeat at rivals Tottenham despite gaining ground on the top four by beating Southampton on Wednesday.

Second-half goals from Alexis Sanchez and Olivier Giroud secured a 2-0 win at St Mary's Stadium, a result that left the Gunners three points adrift of fourth-placed Manchester City and four off Liverpool, who have played a game more in the Premier League.

It was a fourth win in five league matches for Arsenal, whose manager Arsene Wenger has faced increasing calls to end his lengthy tenure following another disappointing season, although they do have an FA Cup final against Chelsea coming up.

Despite an improvement in points return, Arsenal were beaten 2-0 at rivals Spurs late last month and goalkeeper Cech acknowledged that loss may have left the team with too much to do in the hunt for a Champions League place.

"Every game we try to give ourselves a chance," Cech told BBC Sport.

"We shot ourselves in the foot against Tottenham and we are aware we need to win all the remaining games to be in the race.

"We had a big game against [Manchester] United [a 2-0 win] and then here [Southampton], where historically we haven't done that well in the league.

"It was tough in the first half but then we found the opening and deserved to win."