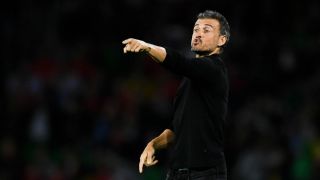 Luis Enrique was left clinging to Spain's slim hopes of a Finals place in the Nations League after Croatia won 3-2 in Zagreb on Thursday.

Spain still lead Group 4 in League A but their fate is out of their own hands after Tin Jedvaj's double, with England hosting Croatia on Sunday in a winner-takes-all encounter.

Luis Enrique's men need a draw in that clash at Wembley in order to progress, having capitulated after a storming start that included a 6-0 thrashing of Croatia, but the coach insists qualification was always going to be a tough ask.

"It was a very difficult group," he said. "There were always going to be chances until the end. We still have a chance."

And he added his analysis of a second half in which Spain were dominant but again fell foul of counter-attacks as Croatia stole victory.

"It was a great second half from both teams. We were better in the first half and we deserved more," the coach said. "Under no circumstances did we deserve to lose.

"I really liked the team in the second half, we turned the game around twice. They were fortunate in the last minute when they were desperate, giving everything.

"We did enough in the second half to win the game, but they caught us on the counter-attack. I'm fairly happy with the game. There are areas for improvement but I don't think we deserved to lose."

Midfielder Sergio Busquets shared Luis Enrique's assessment of the group, but he believes Spain have showed themselves to be the best of the three teams.

"We deserved more but, for one reason or another, it was not be," Busquets said. "It was a very difficult group with national teams that came from the World Cup in good form, very powerful, but I think we were the best team in the group."