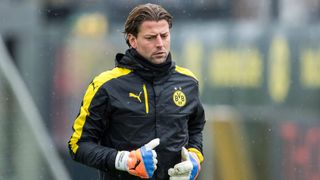 Roman Weidenfeller has signed a new contract with Borussia Dortmund that will keep him at the club until June 2018.

The experienced goalkeeper's previous deal was due to expire at the end of the current campaign, but he has inked a one-year extension to end speculation about his future.

The 36-year-old joined Dortmund from Kaiserslautern in 2002 and is the longest-serving player in the squad.

He has lost his starting berth to Roman Burki, but remains a key figure for the DFB-Pokal finalists.

"I have made a considered decision to stay at my club for another season," Weidenfeller commented on his new deal.

"I want to keep supporting Roman Burki in his development and want to help build up a young goalkeeper.

Weidenfeller has won two Bundesliga titles with Dortmund as well as the Pokal in 2011-12.