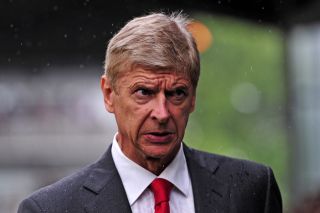 The Frenchman has faced intense scrutiny of late, with the London club's failure to add in the transfer market and opening-day defeat to Aston Villa leading to unrest among fans at the Emirates Stadium.

But Wenger believes Arsenal's recent record means he should not be under pressure from supporters.

"The media in general has brainwashed a little bit the Emirates," he said. "Maybe rightly so, I don't know, because we haven't won trophies for years everything is negative. But we have to live with that and focus on playing well football.

"We lost one game since the beginning of March. That's why it was a shock. But we won in the Champions League at Bayern Munich. We won at Fenerbahce. It is just like that at the moment.

"It's always excessive reaction. The people in charge need to keep their distance from that more than ever."

The 63-year-old also rejected suggestions that his stubbornness has led to Arsenal's disappointments in the transfer market, and insisted the club are still looking to add.

"Someone told me I have had 956 games for Arsenal," he added. "I care about this club and when we had last week's result I was deeply disappointed. This is not a personal trip.

"This is about doing things well for the club I love and I am happy we are back on track.

"If we can gain one, two or even three more, we will do it. They (the players) want to win the league. They enjoy playing together and this is the first year when we have not been traumatised by losing players."