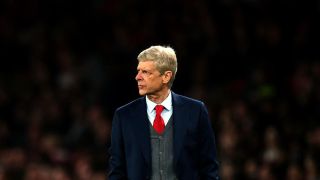 Arsenal manager Arsene Wenger says that fan unrest with the direction of the club is similar to the sentiments that led to the UK voting to leave the European Union.

Gunners fans revolted at the club's annual general meeting on Thursday, the majority of supporters present voting against chairman Sir Chips Keswick and Josh Kroenke – the son of majority shareholder Stan Kroenke – being re-elected to the Arsenal board.

Stan Kroenke and Alisher Usmanov, who was absent and voted by proxy, cast their ballots in favour of both remaining, meaning Keswick and Kroenke Jr were retained on account of a combined 97 per cent shareholding.

The meeting was ultimately cut short as the board members present were jeered, but Wenger has called on fans to trust their leadership - warning against heading into the unknown with new ownership and drawing parallels with Brexit, with Theresa May's government locked in negotiations with the EU and other partners.

"The club is first about values, and in the modern game we lose a little bit the perspective of what is important and what is not," Wenger explained.

"It is always here and now and forever, and the now is permanent, the judgement is permanent and forever - but it is in society as well. You have the same example with Brexit - it's just here now, but where do we go from there? Nobody really knows. Maybe it is good, maybe it is bad. I don't know.

"But nobody has explained what will happen in the future if we do that. So what I think about the club that has been created is first about values. I know that nobody cares anymore.

"Somebody said 500 years ago the target was to be a saint for people. Fifty years ago a hero in war. Today a billionaire, even more celebrity. That is instant and here now. But it has to be sustained by something.

"What I liked when I came to England, the weight of the past was there and you could feel it was important.

"The evolution of the modern society, the weight of the present has become predominant to the past and the future and no matter if it is a football club, you need to get that balance right."