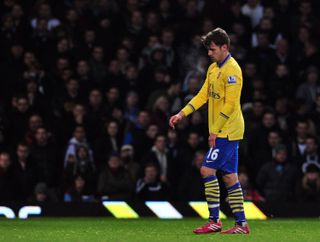 The Wales international has not featured since hobbling off in a 3-1 Premier League win over West Ham on December 26.

Wenger revealed the midfielder is now a number of weeks away from returning to action.

"Ramsey will be out for longer because he had a setback and it doesn't look too good," Wenger told Arsenal's official website.

"It is matter of some weeks for him."

Wenger has been boosted by the news that Tomas Rosicky could return for Sunday's clash with Crystal Palace after undergoing surgery on a broken nose, while Jack Wilshere could be back for the following weekend's trip to Liverpool.

Wilshere has been suffering with an ankle problem and missed Tuesday's 2-2 draw with Southampton, but Wenger is confident he can return for the visit to Anfield.

"We have good news (on Wilshere)," he continued.

"For Sunday he will be short but he has a chance to be available for the week after at Liverpool."

"(For Palace) we have no problems apart from (Mathieu) Flamini, who we lose through suspension. Everybody else should be available.

"We could have Rosicky back again for Sunday. He had problems after surgery on his nose. So we lose Flamini but we gain Rosicky."