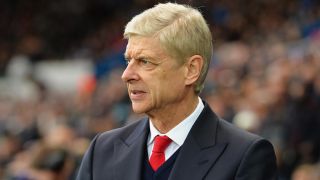 Arsene Wenger has made it clear that his future at Arsenal depends on "a gut feeling".

The 67-year-old's contract is due to expire at the end of the season and he has yet to make a final decision on his future.

"It is not all quantifiable," Wenger told reporters when explaining the tough decision that awaits him.

"It is linked with your gut feeling as well."

Wenger's future at Arsenal has been one of the main talking points at the Emirates Stadium this season, but he does not fear the uncertainty over whether he will stay will affect the team.

"My future has always been certain," the Frenchman added.

"I focus 100 per cent until the last day of my contract. That is the only way you can guarantee the future.

"The players must not think beyond the game."

The former Monaco boss has received his fair share of criticism in recent years and he believes the changed attitude among fans is part of a wider trend in society.

"Everybody can express their frustrations in a fraction of a second now and there is no time to take any distance from what happened," Wenger continued.

"I focus on what I can influence. I live with the response of society. Do we go the right way? Maybe. But if you look at society all over the world, we are not really sure.

"The fans honestly were good on Tuesday night against Watford. You talk about the after-game response and that is usual when your team loses but during the game they were good."