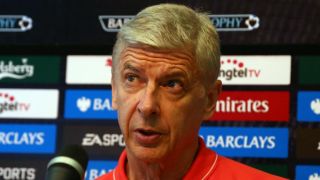 Chelsea goalkeeper Petr Cech is the only arrival at the Emirates' Stadium during the current transfer window, but Lord Harris stated that the Londoners have enough money to shell out on any player apart from Barcelona star Lionel Messi and Real Madrid rival Cristiano Ronaldo.

Manager Wenger believes that is not necessarily the case, though, and - while he says money is available to spend for a marquee signing - he does not intend to go gung-ho in the market.

"He [Lord Harris] has gone a bit overboard because that is not true," he added. "We are in a situation where we are working hard where if an opportunity comes up we can do something but we are not in the need.

"We are in a strong position with a strong squad I am happy with.

"We are open-minded everywhere. We work very hard to find the players we can. We spent a lot of money in the last two seasons and bought Gabriel in the middle of the season to be ready for this season.