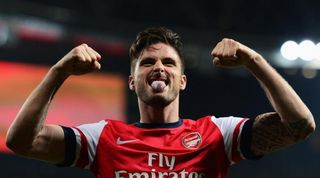 The forward has not started either of Arsenal's first two league matches this season but opened his account with a 90th-minute equaliser at Everton on Saturday.

Giroud's late effort earned Arsenal a 2-2 draw and Wenger, who was quick to highlight his side's depth in attack, expects the France international to score several more as they go in search of their first Premier League title since 2004.

"You never have to set any limitations for any player. For me, he's improving every year and don't rule it out that he scores 25.

"We [also] have [Yaya] Sanogo who will be an important asset, we have Giroud, we have Lukas Podolski, we have Joel Campbell who can play centre forward.

"We have Alexis [Sanchez] and [Theo] Walcott coming back. Let's not forget that."