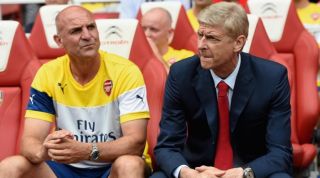 Debutant Brede Hangeland gave the south London side a surprise 35th-minute lead at the Emirates Stadium in their Premier League opener on Saturday, but Laurent Koscielny restored parity on the stroke of half-time.

Palace remained tough to breakdown, retaining many of the qualities installed by Tony Pulis before his shock departure as Selhurst Park boss on Friday.

Nevertheless, Arsenal stuck to their task and, following a second booking for Palace winger Jason Puncheon in the 89th minute, Aaron Ramsey followed his Wembley goals in the FA Cup final and Community Shield with a close-range winner deep into stoppage time.

"I believe that our attitude was right, on the fluency we can do better," Wenger said, having again opted against selected German World Cup winners Mesut Ozil, Per Mertesacker and Lukas Podolski due to their late return for pre-season training.

"But that will come. Let's get everybody physically ready.

"Because of the physicality and the organisation level of Crystal Palace it was very difficult for us.

"Why? Because we conceded a goal from the first corner they had and because we still lack a bit of pace in the final third to change what [play] we build up into dangerous situation.

"But we kept going and in the end it was enough to win the game and take the three points.

"You can see for the first game of the season we are the only team who has won at home. That shows you that it's difficult for everybody on the first day of the season.

"We got the three points we wanted. Let's focus now on Besiktas."

Arsenal are set to go into that UEFA Champions League play-off clash against their Turkish opponents in midweek without Kieran Gibbs, with Wenger confirming the left-back was withdrawn early in the second half due to a hamstring complaint.

"Kieran Gibbs looks to be a hamstring - how bad it is, I don’t know," he said.

Saturday's victory was Arsenal's first on the Premier League's opening weekend since 2009 and Wenger was pleased with the support his players received from the Emirates Stadium crowd during a dogged encounter.

The atmosphere marked a stark contrast to the strong discontent in evidence when Aston Villa ensured Arsenal kicked off 2013-14 with a chastening 3-1 loss on home soil.

"I am grateful for [the support] because before sometimes we had to face some frustration but, even at 1-0 down, they stayed behind the team," Wenger added.

"At 1-1, when we started to have heavy legs, they gave us some energy."