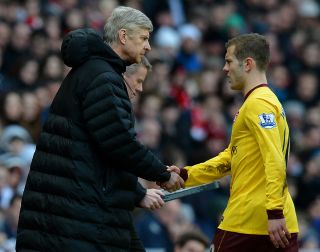 Wilshere was photographed with a cigarette while celebrating following his side's 2-0 UEFA Champions League victory over Napoli in midweek, and Wenger has warned the England international about his conduct.

"I disagree completely with that behaviour - I need to have a chat with him about that," the Frenchman said ahead of Arsenal's trip to West Brom on Sunday.

"When you are a footballer you are an example and you do not do things to damage your health… it can damage your reputation as well.

"Things are different now. I've travelled on the coach as a player in France when you could not see each other because of smoke. But times have changed... football players are role models now."

Wenger, whose side lead the Premier League after six games, refused to disclose what he will say to Wilshere and whether disciplinary action will be forthcoming, but he went on to insist that the 21-year-old remains a key member of his squad.

"He is a very important player here. My plans for the future involve Jack," he added.