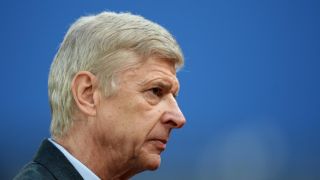 Arsene Wenger is convinced there is no doping in English football and is ready to sit down with UK Anti-Doping (UKAD) after chief executive Nicole Sapstead stated earlier this week she would like to have a meeting with the Arsenal manager.

The Frenchman has long been an advocate for a deeper look into the scale of drugs in football and called for blood testing in 2013.

Wenger recently reiterated his desire to see blood tests used to detect drug cheats, but he does not think there is a structural problem in the Premier League.

"Does doping happen in English football? No. I'm sure that not one club in England is trying to dope its players," Wenger said at a news conference. "I'm absolutely 100 per cent convinced that nobody in England tries to do that as a club. I'm convinced of it.

"I have more desire than time to talk to UKAD, but I am always happy to help people who want to fight against doping if I can. I've said what I had to say and I've not got a lot more to do. I just think in our job, in football especially, we look like we want to tackle the problem now. It looked to me for a long period that we didn't.

"I'm available. I do not have a special desire, I just want to help tackle doping because we all have a responsibility to fight against it. If they feel they need to talk to me then I am available. What is important to me is that we all have to show that we don't accept it.

"It is important that when a guy wins, we think it is because he is the best and not because he is taking illegal substances. On the other hand it's a health issue as well. We have experienced people who have died early because they were doping, which means they took it without any medical assistance. That is even more dangerous. It’s a justice issue and a health issue."

Meanwhile, the Football Association's (FA) director of football governance and administration, Darren Bailey, has made it clear the governing body is doing everything within its powers to keep the sport clean, adding that tests have not led to any unusual results as of yet.

"We discussed this matter with Mr Wenger some weeks ago when the comments were made and both agree this is an extremely important subject. However, just as UKAD confirmed Wednesday, the FA has no current information to suggest the public cannot trust in the measures we have in place nor should anyone think English football would ever get complacent to the risks of doping," Bailey told the official FA website.

"The integrity of our game at all levels is of paramount importance which is why we are committed to ensuring it is maintained. No other national governing body in the UK dedicates as much resource to prevent doping in its sport and the FA operates one of the most comprehensive national anti-doping testing programmes in the world. We conducted 2,286 tests in season 2014-15.

"Drug testing is conducted both in and out of competition on a no-notice basis including at players’ home addresses. In addition, the FA runs both a blood profiling and a urine steroid profiling programme.

"There have been exceptionally few unusual results in English football and none which have so far suggested a doping issue."