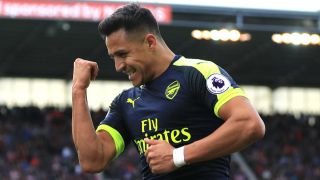 Alexis Sanchez earned the praise of Arsene Wenger after playing through discomfort to score in Arsenal's 4-1 Premier League win at Stoke City on Saturday.

The Chile international signalled that he needed to come off in the second half at bet365 stadium, where he then struck to put the visitors 3-1 ahead in the 76th minute, before being replaced by Aaron Ramsey 60 seconds later.

The future of Sanchez has been the subject of speculation as the Gunners battle to qualify for the Champions League, with the former Barcelona and Udinese forward's body language having been questioned at times in a campaign of struggle.

But Wenger, who has offered the 28-year-old plenty of public support in recent weeks, again talked up the striker's determination.

"The physios told me Alexis Sanchez wanted to come off, I don't know what it was, but he's a fighter and found the resources to score an excellent goal after," he said.

"I just think he has shown again that it's not about talent but desire too and fighting spirit and he has that as well."

Wenger's situation is also a topic of intense debate, as many Arsenal supporters demand the Frenchman - out of contract at the end of the season - makes way for a change in leadership.

However, after beating Manchester United, Southampton and now Stoke in the last three matches, the 67-year-old showed few signs of backing down in the face of strident criticism.

"We had a difficult week but we've won convincingly so the focus is there, the fighting spirit is there and we're pleased to win," Wenger said.

"I believe when the team plays well we have the right individual talent to win.

"When they scored the 'hand-goal' they came back but when you go to places like Stoke you need at some stage to suffer and stick together and that's what we did.