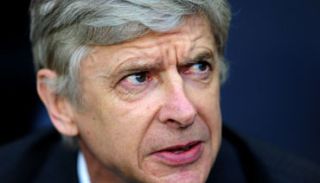 As end-of-season fixtures go, the clash at Emirates Stadium could hardly have more importance to the two sides involved.

"Both teams will go for it, it's a huge game for both of us," Arsenal boss Arsene Wenger told reporters on Monday.

Arsenal slipped out of the top four on Sunday as neighbours Tottenham Hotspur came from a goal down to beat Stoke City 2-1 in their penultimate match of the season.

Tottenham, who missed out on the Champions League despite a fourth-place finish last season because Chelsea won the competition, have 69 points to Arsenal's 67.

Victory against Wigan and then at Newcastle United on Sunday would guarantee Wenger's side finished above Spurs but there is only a cigarette paper between the North London rivals.

Tottenham, who face Sunderland at home on Sunday, are relying on Wigan or Newcastle to take points off the Gunners and will be encouraged by Wigan's superb display in the 1-0 defeat of Manchester City, although less so by Newcastle manager Alan Pardew's comments that he would not care if his side lost 4-0 to Arsenal now that they had secured top-flight safety.

Wenger believes Arsenal's strong end-of-season run will see them over the line at Tottenham's expense.

"We are on a remarkable run and have been hugely consistent and our destiny is in our hands," said Wenger, whose side have won six of their eight league games since losing 2-1 to Tottenham at White Hart Lane in March.

"Two months ago our destiny was not in our own hands; today it is. So let's finish the job."

The odds are against Wigan's survival, especially after the physical and emotional energy they used up in the Cup final.

They have 35 points, four behind Sunderland who are fourth from bottom and five behind Aston Villa.

However, should they beat Arsenal, as they did last year at Emirates Stadium, they would set up a relegation-decider at home to Villa on Sunday.

Manager Roberto Martinez, who inspired his players to stave off relegation last season, said the cup final would not hamper his side's chances of another great escape.

"It was a moment that changed the perception of our club for millions of people outside the UK and that is really positive but it doesn't need to affect the next two matches," he said.

Defender Paul Scarner said the match against Arsenal was just as important as Saturday's final.

"We need to win our last two games," he said. "We need to treat this like two more FA Cup finals."