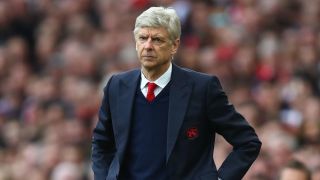 Arsene Wenger was surprised to see Arsenal and Manchester United players hug each other ahead of their Premier League encounter on Sunday, but does not think it affected their focus on the game.

The players' behaviour before kick-off was criticised by pundits such as Phil Neville and Martin Keown, with United and Arsenal enjoying a fierce rivalry during the duo's playing days.

Nevertheless, Wenger did not see any issues with the camaraderie between both rivals.

"I understand the pundits are surprised by that because 10-15 years ago that did not exist," the Arsenal boss stated at a news conference.

"I was surprised as well but I must confess it does not stop players concentrating on the game.

"Also, there are more cameras now. Maybe it happened before but there were no cameras in the tunnel.

"It is an overall international thing now. It is the same at Real Madrid and Barcelona."

Enjoy ?Well if you did, you'll definitely like thisWatch here May 8, 2017

Wenger was also questioned about his future at Arsenal once more, but the Frenchman was unable to provide any updates as to whether he will stay at the Emirates Stadium into next season and beyond.

However, Wenger did make it clear that there will not be room for a director of football at the Gunners if he does sign a contract renewal.

"I am manager of Arsenal and as long as I am manager I will decide what happens on the technical front. That is it."