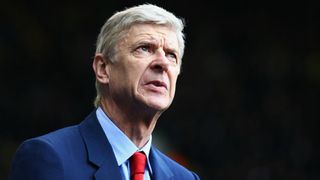 Runners-up in 2006, Arsenal have reached the quarter-finals of Europe's premier club competition on six occasions under Wenger.

Yet as they prepare for the first leg of a last 16 tie with Monaco, Wenger outlined the importance of applying full focus to every game the club plays.

"We've played one final, two semi-finals [including the last-four tie Arsenal played on their run to the final], four quarter-finals.

"That's what you want - to go to the end and win it, but if you look around you, you know only one thing and that's do it step by step.

"If you look at the teams who are competing, there's always a reason to think it's difficult.

"Let's just do the next game, do that with belief and humility, and try to give everything we can."

Arsenal host Monaco on Wednesday, with the return leg taking place on March 17.