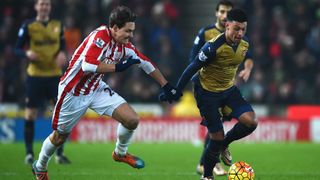 Arsene Wenger has praised his players for the fight they showed in their 0-0 draw away to Stoke City on Sunday.

The Britannia Stadium has seldom been the easiest place to visit this season and while Wenger was disappointed with his team's final product, he was pleased with the way his players matched Stoke's physicality.

"I’m of course a bit unhappy because we like to score goals and we didn’t score today.

"We maybe lacked the final ball, the creative side of our game. But they made a fight of it and we had to respond."

Wenger said in light of Arsenal's recent history away to Stoke, the stalemate certainly was not his side's worse result.

"But overall, compared to the results of all of the other teams who play at the top, it’s still a positive result.

"There’s a charisma in this team, a togetherness that comes out with a fighting attitude.

"[We are] people who really want to do well and that came out again today.