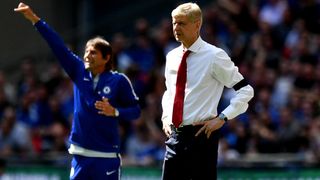 Arsene Wenger insists he will not use the Europa League as an excuse for a poor performance when Arsenal play rivals Chelsea on Sunday.

After missing out on the Premier League top four last season, Arsenal have dropped to the Europa League and will open their campaign in Europe's second competition at home to Cologne on Thursday.

That will come three days before a crunch trip to Stamford Bridge to play Chelsea, a game which will see Arsenal aim to beat a fellow Premier League top-six team for the first time in 14 attempts.

If Arsenal fail to perform, Wenger will not be blaming the Cologne game – for which Mesut Ozil and Aaron Ramsey will be rested – as he feels there is enough time to recover.

"It is a good opportunity to show we can cope," Wenger told reporters when asked about the challenging double-header this week.

"We played Wednesday night in Barcelona and Saturday morning at Everton [in March 2016] and we won.

"You have to not get caught in your mind with preconceived ideas, football is down to how you perform on the day.

"Three days is plenty of time to recover. Wednesday night or Thursday night is no problem.

The boss on :"I have said many times that his contribution has been huge. He has had a great evolution here"September 13, 2017

Manchester United made a winning start to their Champions League campaign against Basel on Wednesday, having reached the tournament by winning the Europa League, but Wenger has not changed his view on where the competition should lie in his priorities.

"It is not the best chance but one of the opportunities," he said.

"I came out and many times and said I think the best way is through the Premier League.

"This is a different competition and we want to win every competition we play in, but we don't calculate that this is the best way to the Champions League qualification.

"We have done that for 20 years and 20 years by doing it in the Premier League."

Wenger rejected the idea that playing in the Europa League was a dent to his ego as a manager.

"No," he said. "The disappointment for not finishing in the top four was there, of course, but unfortunately we were one point short.

"We made 75 points last year and overall I am humble enough to be happy enough to win every single competition."