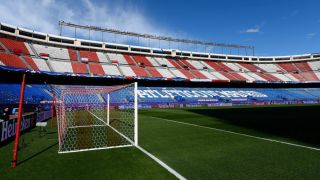 Atletico Madrid target Axel Werner said he is excited to be joining to one of the "giants of Europe" ahead of his expected arrival at the Vicente Calderon.

Reports out of Spain suggest 20-year-old Werner is set to be announced as an Atletico Madrid player in the coming days from Atletico Rafaela in Argentina.

The Argentine goalkeeper, who made his senior debut in October 2015, established himself as a regular starter for Rafaela earlier in the year following an injury to German Montoya.

While no deal has officially been confirmed, Werner revealed he has been in contact with Atletico Madrid in recent weeks.

"Since I found out [Atletico wanted to sign me] I felt tremendously excited," he told Marca.

"It is a unique opportunity for me. I am moving to a giant of Europe. It's an important move."

He added: "I have had contact with people over there who asked me about my situation and intentions, but not with the coaching staff."

On Simeone, Werner said: "He's eligible to be regarded as the best coach in European football. He's a modern coach that tries to introduce a new alternative system.

"It's no surprise that he has made the Champions League final twice."

Werner also recognised he is likely to be sent out on loan by Atletico Madrid, with the club already possessing Juan Oblak and Miguel Angel Moya within their goalkeeping ranks.

"I am going to a big club that know what they have to do," he said. "Whatever resolution they take with me will be positive.

"I will fight wherever I am. Of course I want to play, and I will love to be Atletico goalkeeper some time, but if I have to advance my career somewhere else I will understand."

Werner, who has represented Argentina at various youth levels, was named in the 18-man squad for the upcoming Olympic Games in Rio de Janeiro.