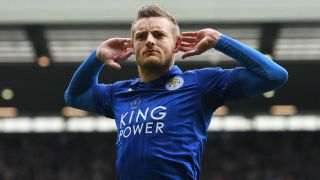 After helping guide Leicester City to the title last season, Jamie Vardy was the difference again as they all but secured Premier League survival with a 1-0 win at West Brom.

England international Vardy has been unable to recapture the scintillating form that fuelled Leicester's unbelievable charge to the 2015-16 crown.

But his quality has rarely been in doubt and he showcased his striking prowess yet again to take Leicester to the 40-point mark.

Vardy pounced on an error from Salomon Rondon to open the scoring shortly before half-time in Saturday's contest at The Hawthorns, which served as referee Mark Clattenburg's final Premier League game.

West Brom put pressure on the Leicester goal in the second half, particularly in the closing stages, but in truth Kasper Schmeichel was never troubled.

Sandwiched between those two bookings a great opportunity fell to Chris Brunt, who was denied an opening goal for the hosts as Schmeichel tipped his far-post header over.

West Brom looked the more likely to break the deadlock but they provided Vardy with a gift two minutes before the interval.

Rondon conceded possession with a poor pass towards his own goal, which was latched onto by Shinji Okazaki, who played in Vardy to fire past Ben Foster.

Riyad Mahrez cut in from the right and shot into the side-netting as Leicester searched for a second after the interval.

Chadli curled a free-kick narrowly over at the other end, before James Morrison could only manage to head a wonderful James McClean cross straight at Schmeichel.

West Brom saw a shout for a penalty waved away after Robert Huth bundled over Rondon in the box.

Mahrez continued to appear to be the leading candidate to provide the game with a second goal, failing to get enough curl on an off-target effort from the edge of the box.

But Leicester's failure to find a second mattered not, as the hosts' blunt attack ensured it was a winning return to The Hawthorns for former West Brom player Craig Shakespeare, the Foxes' caretaker boss.