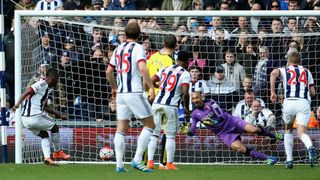 Watford warmed up for next weekend's FA Cup semi-final against Crystal Palace with a battling 1-0 win at West Brom thanks to Ben Watson's first-half goal and Heurelho Gomes' pair of penalty saves.

Saido Berahino's two second-half spot-kicks were well saved by Gomes, with Watford holding firm and recording their 11th clean sheet of the season to move above West Brom in the Premier League table.

Watson put Watford in front after 26 minutes, getting ahead of his marker from Adlene Guedioura's corner to flick a sweet finish across Ben Foster and in off the post.

With Wembley, and a potential penalty-shootout on the horizon, Gomes' success at spot-kicks may have many Hornets fans dreaming of a return trip for the final after he preserved Watford's first win in seven Premier League games and their first victory against West Brom in 16 attempts.

Watford gave a first Premier League start of the season to Guedioura, while Claudio Yacob was recalled to the West Brom midfield in the only change made by Tony Pulis.

Guedioura went close to scoring the opening goal after 16 minutes, pulling a shot narrowly wide from the edge of the penalty area.

Gomes made the first save of the game after 24 minutes, beating out Stephane Sessegnon's free-kick, before Jose Manuel Jurado shot straight at Foster from 25 yards.

Watford came into the game as the lowest-scoring team in the Premier League in 2016 but Watson gave his side the lead.

The midfielder turned home a Guedioura corner with a finish that went in off the post to become just the third player to score more than one Premier League goal for Watford this season.

James McClean tricked his way into the Watford box but he delayed shooting and his effort eventually drifted off-target, then Sessegnon's strike swerved just wide after 39 minutes.

McAuley's mistake then led to a great chance for Troy Deeney after 56 minutes, but Foster made a fine save.

West Brom were then awarded a penalty after 67 minutes when Gomes brought down Berahino in the box, but the goalkeeper redeemed himself to save a poorly directed effort.

Berahino's deflected effort looped over the crossbar after 83 minutes but Sessegnon soon won another penalty, harshly awarded against Capoue.

This time Berahino went low to Gomes' left, but the goalkeeper made another fine save to jubilant celebrations in the away end.

Watford held on to record their third clean sheet on the road in the Premier League this season, with both sides virtually assured of their top-flight status for next season, with at least 40 points on the board.