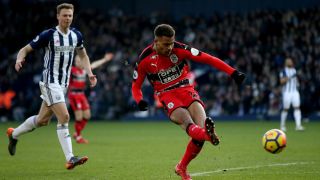 West Brom's Premier League status is hanging by a thread after falling to a 2-1 defeat to fellow strugglers Huddersfield Town at The Hawthorns.

A fourth defeat in a row for Alan Pardew's side mean they are six points adrift at the bottom of the table and seven points away from 17th place.

The damage was done during an 11-minute spell at the start of the second period as David Wagner's side took advantage of some insipid defending to pull away from the hosts.

Firstly, Rajiv van La Parra - who scored the winner in the reverse fixture in November - picked out the bottom corner from close range before Steve Mounie burst through a static backline to double their advantage.

Craig Dawson gave the hosts faint hope of a comeback with a header midway through the second period, but they never looked like drawing level as Huddersfield held firm in the closing stages.

A second consecutive win for the Yorkshire side moves them up to 14th in the table - three points away from the relegation zone.

Both sides' fear of defeat was evident during a tepid opening half-hour with neither prepared to break their shape to force an opening.

The game burst into life 10 minutes before the break, however, with Huddersfield denied an opener through a combination of Ben Foster and one of their own players.

James McClean then squandered a golden opportunity to hand the hosts the lead. Matt Phillips' surging run ended with a lofted cross to the back post, but the Republic of Ireland international could only send his controlled volley over Jonas Lossl's crossbar.

Perhaps buoyed by that let-off, the Terriers came out for the second period with a spring in their step and opened the scoring three minutes later.

Collin Quaner took his time before picking out Van La Parra, who coolly slotted into Foster's bottom corner from 10 yards out.

Danny Williams then drilled a low shot agonisingly past Foster's post, but the visitors did not have to wait long for their second, which duly came after 56 minutes.

Pritchard picked apart the Baggies' backline with a smart throughball, which Mounie latched on to and whipped past the onrushing Foster for his fifth Premier League goal of the season.

West Brom then gave themselves an unlikely lifeline in the 64th minute as Dawson climbed highest to head substitute Chris Brunt's corner in.

Only a superb save by Foster prevented Williams' sweetly-struck volley finding the top corner soon after, while Lossl excelled at the other end to deny Brunt’s free-kick.

Huddersfield looked solid in the closing stages to hold on to their lead and heap further pressure on Pardew and his beleaguered side.

- Huddersfield Town have won back-to-back Premier League games for the first time since their opening two fixtures of the season.
- West Bromwich Albion are the first side the Terriers have ever done a Premier League double over since reaching the competition.
- Under Alan Pardew, West Brom have accrued just eight points in 14 Premier League matches (W1 D5 L8), four fewer than their first 14 games of the campaign before his arrival (W2 D6 L6).
- Rajiv van La Parra has scored two of his three Premier League goals against the Baggies (67 per cent).