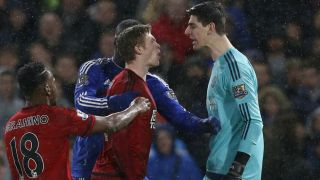 West Brom players were trying to provoke their Chelsea counterparts, according to goalkeeper Thibaut Courtois.

Chelsea were forced to settle for a 2-2 draw against West Brom on Wednesday, with the visitors equalising twice at Stamford Bridge.

James McClean scored the goal that sealed the point with just four minutes left on the clock after Gary McCauley had put it into the back of his own net to give Chelsea a 2-1 lead.

The game was a fiery one throughout, and Courtois slammed West Brom's tactics after the game.

"It was a tough game with them playing the long ball and, second ball, trying to provoke players."

Premier League champions Chelsea remain 14th in the league after 21 games, five points outside of the top 10.