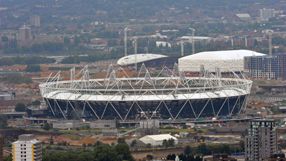 The Olympic Park Legacy Company (OPLC), set up to make sure the Olympic venues do not become redundant once the Games are over, will now enter into final negotiations with both clubs. A decision is expected in the first half of next year.

West Ham United, whose current Upton Park ground is close to the 516 million pound venue, were the first club to express interest in moving.

"We are very pleased with the extensive and serious interest shown in the stadium," OPLC chair Margaret Ford said in a statement.

"We started this process to ensure the very best legacy for the stadium, and we are now at a point where we have selected the two strongest bids.

"We will go forward to start negotiations with the two consortiums of Tottenham Hotspur and AEG, and West Ham United and Newham Council.

"The stadium is a vital and vibrant component of the Olympic Park - securing the most appropriate and viable solution is crucial for our long-term aspirations for the future Queen Elizabeth Olympic Park area."

Originally, the 80,000-seater Olympic stadium was designed to be stripped down to a 25,000-capacity athletics venue after the Games but there were fears that it would become unsustainable unless a high-profile tenant was found.

While West Ham have received support from UK Athletics after the club's owners, together with bid partner Newham Council, pledged to leave a running track, Tottenham have been less than enthusiastic about retaining one.

A spokesman for the OPLC said on Friday they preferred the running track to be maintained, in line with a promise made to the International Olympics Committee (IOC) when London won the right to host the Games back in 2005.

Tottenham and West Ham both have stadium capacities of 35,000 at present and a move to the Olympics site, with a capacity of around 55,000, would increase their match-day revenue.

Manchester City's move into the stadium built for the 2002 Commonwealth Games has been seen as a success but they were under no obligation to retain a running track, a feature of some continental grounds which is unpopular with English fans.